FORT CAMPBELL, Ken. (KDKA) — A soldier from Harmony and five others who helped rescue crew members after a helicopter crash in January have received the Soldier’s Medal recognizing their heroism.

Spc. Christopher White, of Harmony, was one of six 101st Airborne Division (Air Assault) soldiers honored during the ceremony held at the division’s Kentucky headquarters on Nov. 28. 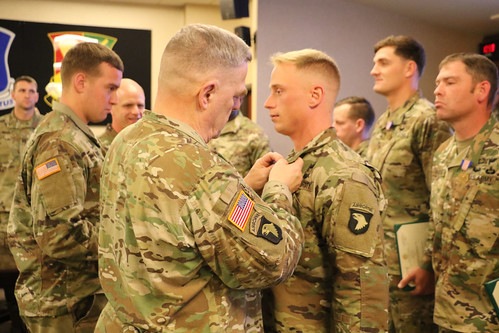 Maj. Martin Meiners reports that four crew members were on the UH-60 Blackhawk helicopter on Jan. 31 when the aircraft crashed into a forest shortly after takeoff. The helicopter landed upside down in a ravine and quickly began to catch fire.

White was one of the first three soldiers to arrive at the scene of the crash. He says he pulled one crew member out of the wreckage, then helped another soldier cut the seat belt off a crew member who was trapped and hanging upside down.

After joining efforts to free the crew chief, who was trapped on the helicopter, White helped move the three other injured crewmen farther away from the crash site to safety.

The five others honored were:

The Soldier’s Medal is the Army’s highest peacetime award for valor.