AUSTRALIA (CBS Local) – A woman in Australia who had a habit of not washing off her mascara developed serious eye problems that could have taken her vision, according to a new report.

The 50-year-old woman went to the eye doctor after experiencing an uncomfortable feeling that something was in her eyes, according to the report, published in the May issue of the journal “Ophthalmology.”

The woman admitted that she’d heavily used mascara for more than 25 years and wasn’t good about taking off her makeup.

“I had fallen into a bad habit of wearing a lot of makeup and not washing it off,” the woman, Theresa Lynch, told the Daily Mail. 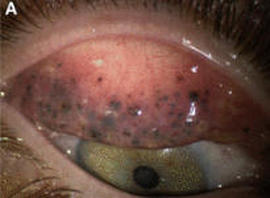 A medical exam revealed dark lumps of pigment from mascara deposited on the inside of a woman’s eyelid. Photo Credit: Robaei/ American Academy of Ophthalmology

When the doctor examined the underside of the woman’s eyelids, she found darkly pigmented lumps under the conjunctiva, which is the transparent membrane that lines the eyelid and white part of the eye. Some of the lumps had even broken through the surface of the conjunctiva, the report said.

Her eye problems were associated with conjunctivitis (inflammation of the conjunctiva) and damage to the cornea.

“[The lumps] were embedded so deep that particles were building up on top of each other … I was so uncomfortable. My eyelids were swollen and heavy because I left it [untreated] for so long,” Lynch said.

Lynch’s doctor, Dr. Dana Robaei, an ophthalmic surgeon and clinical senior lecturer at The University of Sydney School of Medicine, told the Daily Mail that the dark lumps were caused by the buildup of bits of mascara under Lynch’s eyelids. There was a risk that Lynch’s eyes could have become infected, which, in rare cases, can lead to blindness, Robaei said.

“You must be meticulous” about removing mascara, Robaei added.

Lynch underwent a 90-minute procedure to have the lumps removed, but reportedly now has permanent scarring on her eyelids.